FUPIDS stands for Fuzzy Userprofile Intrusion Detection System (it is *not* based on fuzzy logic!). FUPIDS is a kernelcode patch for OpenBSD systems that creates a profile for every user and alerts the admin if an attacker is detected. For FUPIDS, an attacker is a local user who overtakes the account of a user. I wrote the FUPIDS code back in Nov 2003.

The project was heavily discussed and received lots of criticism (mostly due to the bad implementation that I wrote two years before I started studying computer science). Please thus consider FUPIDS as a simple PoC code.

You can find the announcement mail here. The first public version was released with this mail on Tue, 11 Nov 2003 18:44:57 +0100.
deadly.org article (now undeadly.org)
slashdot.org article

You can find a README file in the .tgz archive and you can find the official documentation I wrote for this project in the list of my publications.

You can download FUPIDS 0.0.4 from GitHub. Just follow the introductions of the 'INSTALL' file to install it. I developed this code for OpenBSD 3.3. However, it should be possible to modify it for the current kernel versions.

KSPIDS stands for Kernel Service Profile Intrusion Detection System. It is a kernel code patch for Linux systems that monitors the programs a service user (e.g. www-data) uses. It alerts you if -- for example -- your www-data user now executes something like /bin/sh. Please note that KSPIDS is based on FUPIDS (see above).

Patch your kernel with the KSPIDS patch, activate the option "Security / KSPIDS", recompile the kernel and boot it (but make sure to backup your other kernel and make sure you can boot the other kernel, too (in the case something went wrong)!

You need to calibrate KSPIDS via kspids.c. If you skip this part, you will maybe get too many attack warnings or even not a single one.

Here you can see a typical simulated attack: The user mysql (used to execute the MySQL database daemon) was "exploited" and can now execute something like /bin/echo what lets KSPIDS print out new log messages: 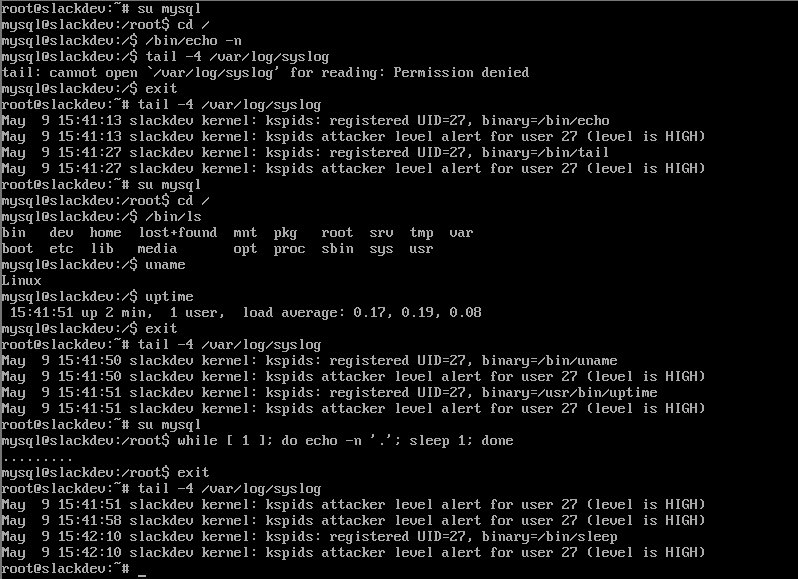 Here you can see how the attacker level decreases after some time due to "normal" behavior: 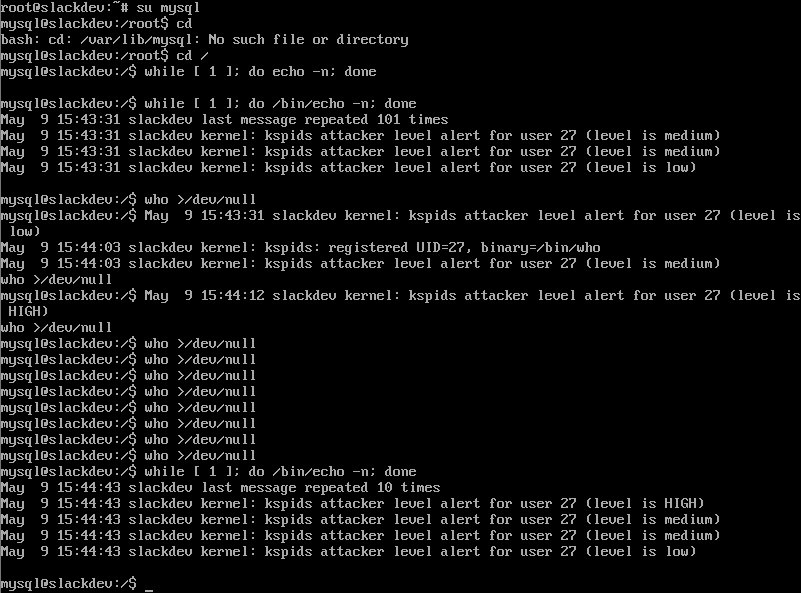 openportd is a very simple ICMP echo reply-based port knocking daemon for OpenBSD. I wrote that code in 2006. You can download it here.