AstroCam is a C based stepper motor control system including both, a Perl and a PHP based webinterface (you can choose one of them). Astrocam can be used for controlling webcams over the Internet/network and for everything else you want to do with a stepper motor. 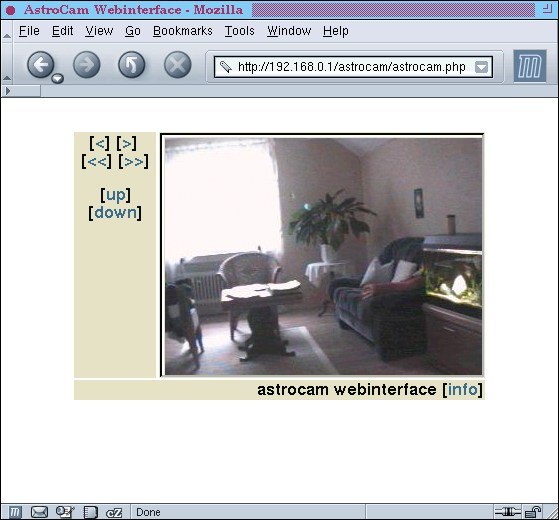 The first AstroCam version was released in Dec 2001 and was written in C and libTk. After I noticed, that the combination of Tcl/Tk and C code was not a good approach, I wrote a CGI-based webinterface and a Gtk-based GUI. A few years later, I removed both parts, rewrote AstroCam entirely, built a PHP webinterface and changed the communication system between its components to message queues. However, the daemon of the software is still written in C. Again a few years later (2007), I wrote an additional Perl-based webinterface to give the user the choice between both webinterfaces what lead to AstroCam 2.7.0. I applied only small patches since 2007 to AstroCam, i.e. 2.7.x is still the stable version.

You can download the current AstroCam version from Freshmeat and from SourceForge.

The SVN repository is available here: http://astrocam.svn.sourceforge.net/viewvc/astrocam/.
You can also see the latest commits on http://cia.navi.cx/stats/project/astrocam.

You can ask questions in the AstroCam Forums and you can report bugs by sending an eMail to Steffen or by writing a bug report.

This is my own AstroCam, installed in 2002. The computer is a 333 MHz AMD K6-2 with 64 MB RAM running Slackware Linux 8.0, and a webcam. The webserver is an Apache-1.x running the old astrocam 0.9-1-1 beta(?) CGI Webinterface and the old (doesn't exist anymore) gameport joystick control of the stepengine.

Q: How does it work and how to install AstroCam?
Take a look at the INSTALL file for installation introductions.

Q: Please tell me more about the requirements of astrocam.
Put the motor on the card (or two motors for up+down and left+right control); turn on the power supply and start the computer. Now start astrocam, install an Apache webserver with php 4.3 or newer (or an other webserver that supports PHP) and pray that it will work.

Q: How to change the design of the webinterface?
Simply change the 'design' value in your /etc/astrocam.conf. The value has to be one of the .css-files in the astrocam directory on your webserver. You also can create your own design files.

Q: astrocam.php says 'Call to undefined function: msg_get_queue()'!
It seems that your PHP extension module is not correctly installed in your php.ini file. Please read the 'INSTALL' file of the PHP-package and the configuration and installation chapter of the php book and make sure that you run PHP Version 4.3.0 or newer.

Q: Is there a way to test astrocam without the webinterface?
Yes since version 2.7.5 (or newer), you can run the included script acam_console.pl. This script will move your step engine to the left/right direction and then exits.

Q: acam_console.pl prints this error: Use of uninitialized value in msgsnd at ./acam_console.pl ... -- what went wrong? (v. 2.7.5 or newer)
Start the astrocam service first by running astrocam as root user.